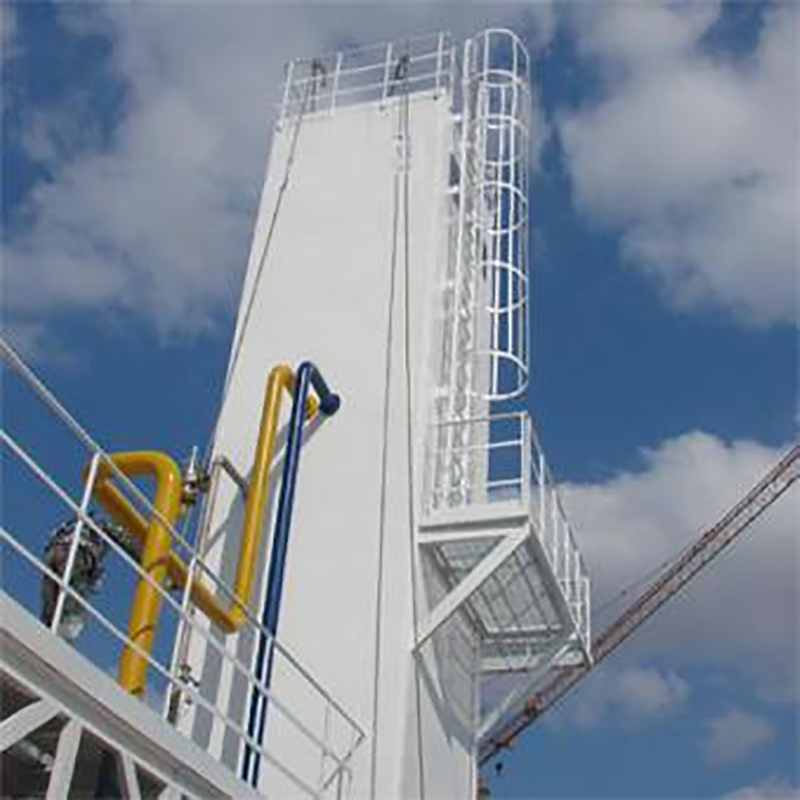 1.Air Compressor: Air is compressed at a low pressure of 5-7 bar (0.5-0.7mpa)
2.Pre Cooling System: Cooling the temperature of air to around 12 deg C.
3.Purification of Air By Purifier: Twin molecular Sieve driers
4.Cryogenic Cooling of Air by Expander: Turbo expander cools the temperature of air below -165 to-170 deg C.
5.Separation of Liquid Air into Oxygen and Nitrogen by Air Separation Column
6.Liquid Oxygen/Nitrogen is stored in a Liquid Storage Tank 1.Design principle of this plant is based on the different boiling point of each gas in the air. Air is compressed, precooled and got removal of H2O and CO2, then to be cooled in the main heat exchanger until it is liquified. After rectification,production oxygen and nitrogen can be collected.
2. This plant is of MS purification of air with boosting turbine expander process. It is a common air separation plant, which adopts complete stuff filling and rectification for argon making.
3. Raw air goes to air filter for removal of dust and mechanical impurity and enters air turbine compressor where air is compressed to 0.59MPaA. Then it goes into air precooling system, where air is cooled to 17 ℃. After that, it flows to 2 molecular sieve adsorbing tank, which are running in turn, to be got removal of H2O, CO2 and C2H2.

* 1. After purified, air mixes with expanding reheated air. Then it is compressed by middle pressure compressor to be divided into2 streams. One part goes to main heat exchanger to be cooled to -260K, and sucked from the middle part of main heat exchanger to enter expansion turbine. Expanded air returns to main heat exchanger to be reheated, after that, it flows to air boosting compressor. The other part of air is boosted by high temperature expander, after cooling, it flows to the low temperature boosting expander. Then it goes to cold box to be cooled to ~170K. Part of it would still be cooled, and flows to bottom of lower column via heat exchanger. And other air is sucked to low tempt. expander. After expanded, it is divided into 2 parts. One part goes to the bottom of lower column for rectification, the rest returns to main heat exchanger, then it flows to air booster after being reheated.
2. After primary rectification in lower column, liquid air and pure liquid nitrogen can be collected in lower column. Waste liquid nitrogen, liquid air and pure liquid nitrogen flows to upper column via liquid air and liquid nitrogen cooler. It is rectified in upper column again, after that, liquid oxygen of 99.6% purity can be collected at the bottom of upper column,and is delivered out of the cold box as production.
3. Part of argon fraction in upper column is sucked to crude argon column. There are 2 parts of crude argon column. The reflux of second part is delivered to the top of first one via liquid pump as reflux. It is rectified in crude argon column to get 98.5% Ar. 2ppm O2 crude argon. Then it is delivered to the middle of pure argon column via evaporator. After rectification in pure argon column, (99.999%Ar) liquid argon can be collected at the bottom of pure argon column.
4. Waste nitrogen from top of upper column flows out of the cold box to purifier as regenerative air, rest goes to cooling tower.
5. Nitrogen from top of assistant column of upper column flows out of cold box as production via cooler and main heat exchanger. If no need nitrogen, then it could be delivered to water cooling tower. For cold capacity of water cooling tower is not sufficient, a chiller needs to be installed.